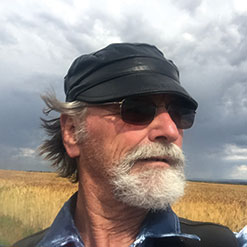 Publisher Frank Lister
Expert of the Southwest, Four Corners and their Native Cultures

A Colorado native, Frank’s love for the rich legacy of the Southwest is in his DNA

The son of famous archaeologists, Frank Lister’s mother, Florence Lister, was a noted writer and scholar of Southwestern archaeology and world ceramics. Her husband, Robert Lister, a graduate of the University of New Mexico and Harvard, helped found the anthropology department at the University of Colorado-Boulder. The couple spearheaded research in Mesa Verde, Chaco Canyon, Mexico and Northern Africa.

Inspired by his parents, Frank worked with the Navajo Tribe to republish A Geographic Dictionary of the Navajo Lands in the 1930s by Richard Van ValkenBurg, a map of the traditional Native American tribe’s homeland with placenames in the Navajo language. It is used in schools and by individuals as a cultural preservation tool.

For the last decade, he has been an active member of the Mesa Verde Museum Association and the Canyonlands Natural History Association, promoting education of public lands. He also helped establish the Ute Mountain Ute Tribal Park adjoining Mesa Verde National Park. As a Smithsonian/Peace Corps volunteer, he helped establish the two-million-acre Defensores Del Chaco National Park in Paraguay.